When Angela Dawn Parker adopted two adorable kittens named Roy and Cher from the Ontario Society for the Prevention of Cruelty to Animals, she never imagined she would one day open her own rescue.

Flash forward nine years, and that’s exactly what she’s doing. These days Parker has her hands full running Roy and Cher’s Rescue Farm, a vegan-inspired organization in Bainsville, Ontario, which is named after the now full-grown cats who captured her heart.

​“Roy has a bit of anxiety, so by having him I learned how to be more patient and understanding,” said Parker, a 2001 Loyalist College television broadcasting (now Film & TV Production) graduate.

“In 2013, when I decided to start the rescue, I chose to name it after Roy and Cher because they were one of the reasons why I decided to do it. I wanted to use patience and compassion to assist other animals.” After Loyalist, Parker worked in the film industry for many years. She was an assistant editor on Kink (Showcase, Paperny Films, 2002) and a production coordinator/editor/sound recordist on Scooter Trash (OLN, WhistleStop Productions, 2003).

At Gray's, getting more green

About 60 volunteers took shovels in hand to help plant trees at Gray’s Creek Conservation Area on Sunday for TD Tree Days.
​
“It is our third year here at Gray’s Creek,” said organizer Angie Parker of the event, which is sponsored by the TD Banks’ Friends of the Environment Foundation. “The last two years, we planted across the creek on the east side. This year we selected this site to add on to the edible forest we started this year.” 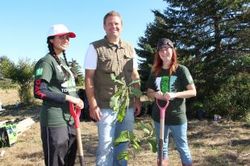 Standard Freeholder, October 29, 2015
With several jobs on the go, and while studying for a Masters degree, Angie Parker is still finding time to help animals.

"I need a lot of help and volunteers," said Parker, of Bainsville, who in 2013 founded Roy and Cher's Animal Rescue, a registered not-for-profit organization that assists animals suffering from abuse, neglect and abandonment, operating as a network of fosters throughout Eastern Ontario and Southern Quebec.

Currently, there's a need for cat fosters, and for horse fosters, with the horse fosters required to be located in Glengarry, or the Dalhousie/Riviere Beaudette area in Quebec.

"Volunteering with rescued animals can be a very rewarding experience," said Parker, who grew up in Lancaster.

Parker, back in 2009, adopted two 10-month-old cats, Roy and Cher, from the Ontario Society for the Prevention of Cruelty to Animals (OSPCA), and a few years later she named her organization after them.

The organization is governed by volunteer board members, and Parker is the director of operations. She's been working with horses since the age of seven, and is currently studying natural horsemanship, learning to work with neglected horses and teaching them to trust again.

Parker, who has a BA in Geography from Concordia University in Montreal, has worked in television and magazine media for a decade, and she's currently working toward her Master of Science degree in Geography and Environment at Concordia.

She's busy, and well-travelled. Parker has lived in over 30 places, travelled seven countries, and has "worn many hats," she said.
​
It was during her time as an employee at the Vancouver Aquarium when she said she started to "realize the emotions in animals, particularly dolphins, orcas and belugas," and she worked closely with injured and abandoned baby seals at Vancouver's Marine Mammal Rescue Rehabilitation Centre.

Greening Gray's Creek one tree at a time

Seaway News, September 21, 2014
Angie Parker, site leader for TD Tree Days, was thrilled to announce that 50,000 trees were planted across Canada on Sept. 21.

For full story: Greening Gray's Creek one tree at a time

For more about TD Tree Days: TD Friends of the Environment Foundation 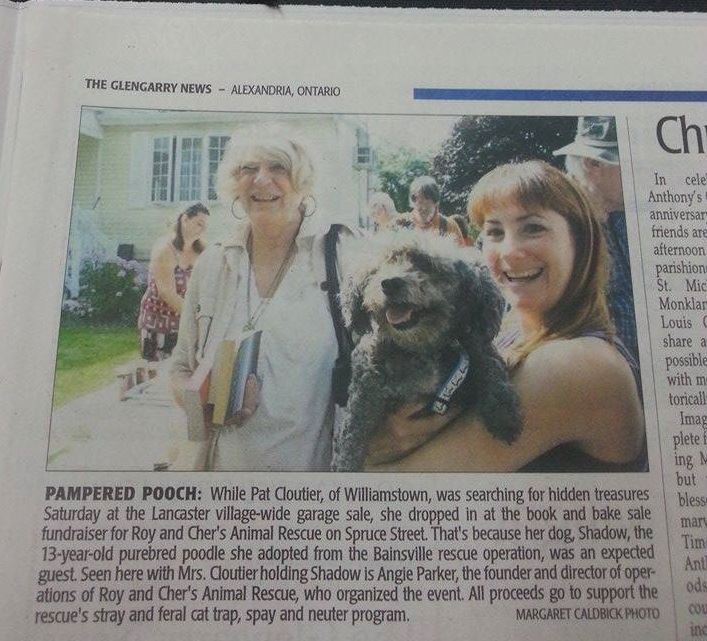 Angie Parker, founder of Roy & Cher's Animal Rescue, agreed that animal companions should not be given as gifts.

"It's not the best idea. When a new animal arrives in the home, it needs a calm environment. At Christmas there are children opening gifts, the Christmas tree and visitors coming in and out."

Parker said her concern about a companion as a gift is the animal could unintentionally get neglected during the holidays as people rush to visit or need to travel to see family. It can be very distressing for an animal. She also pointed out giving an animal as a surprise could result in neglect.

"The person could have allergies or other medical conditions. Then the animal has to be taken back and being bounced back and forth isn't good for them."

Parker suggested if you really want to give an animal for a gift, give a gift certificate instead. That will allow the person or family to go to the shelter of their choice and choose the right animal for them.

Cornwall Seaway News, February 17, 2015
It all began when Angie Parker, who is presently working on her Master’s degree in alternative farming, attended an animal rights conference in Washington, a couple of years ago.

The experience would be life changing for her. She enlisted her friend, Chantal Comtois, and formed Roy and Cher’s Animal Rescue Farm. Roy and Cher being the two cats Parker has adopted from an animal shelter.

Fundraiser raises over $2500 for abused, abandoned and neglected animals

The Seeker, October 28, 2013
Angie Parker, Founder and Director of Roy and Cher’s Rescue Farm, was impressed with the turnout. “I started this organization only five months ago. Word has spread quickly. I am very grateful for such amazing support.” The former television producer and magazine editor attended FARM’s Animal Rights Conference in Washington, DC in July to learn more about animal rescue. “I met so many remarkable people who have animal rescues in the States, including Jenny Brown of Woodstock Farm Sanctuary and Scotlund Haisley of Animal Rescue Corps. I learned so much about animal care, as well as charity and grant applications, and business organization.”

For full story: Fundraiser raises over $2500 for abused, abandoned and neglected animals